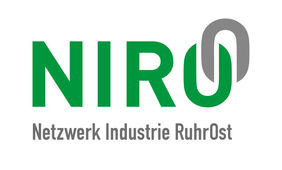 The members of the East Ruhr Industry Network (Netzwerk Industrie RuhrOst, NIRO) assembled at the premises of Halbach subsidiary Fleischauer in Herne for this year's meeting. CEO Philipp Halbach presented the various aspects of Diagramm Halbach's business operations to the 40 attending delegates, drawing particular attention to the company's specialization in the ticket and security printing sectors. The company manufactures tickets, cards and RFID products for access control applications at the Herne facility, including magnetic tickets for car parking systems, as well as mass transit tickets with RFID chips or chip cards for access control applications. Millions of tickets are manufactured on the production machines at the Herne security printing facility every day and these are used for sensitive technical applications in more than 60 countries all over the world. CEO Philipp Halbach not only led the visitors through the security checkpoints on the production line, but also into the quality assurance department, where tickets and cards are tested for faultless functioning on numerous original systems in simulated live mode. The tour of the RFID processing systems aroused particular interest. RFID stands for radio-frequency identification and describes the contact-free read-out of data by means of a transponder, which is a combination of chip and antenna. RFID tags are inserted into preprinted webs of material and the tickets are then punched and made up. The finished tickets can be used for access control applications in public transport systems or as admission tickets to recreational areas or event venues.

With its headquarters in Unna, NIRO has been networking regional companies from various branches of industry since it was founded in 2006. 65 businesses with around 17,000 employees are currently enjoying the benefits of this cooperative venture: they join forces to overcome staff shortages, introduce new techniques into production processes and establish good purchasing conditions. NIRO is part of the "Competence Networks Germany" initiative of the Federal Ministry of Economics and Technology (BMWi). NIRO was awarded the Robert Jungk Prize for its future-oriented projects in December 2009.